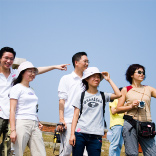 On 22 October 2006, WGAHK organized a boat trip to some of the most scenic areas in Hong Kong. 30 Warwickers and friends gathered at Ma Liu Shiu Pier where the boat took sail. After an hour’s ride, we arrived at our first stop—Grass Island (塔門)— an island located at the northeastern part of Hong Kong. We first visited the Tin Hau Temple which was built during the period of Emperor Kangxi of Qing Dynasty (1662~1721 AD) and is one of the oldest of its kind in the territory.

The group then marched up the hill to take a panoramic view of the eastern coast of the island with rocky beaches and mighty waves. Some of us even ran downhill to the beach to grasp a closer look of the shore and took pictures there. We had our lunch in the only restaurant on the island and had a genuine taste of seafood in a fishing village.

Our next stop was Ping Chau (東平洲) which is the most remote island in Hong Kong. As its name suggests, the island looks long and flat from afar with no hilly landscape. Different kinds of rocks with beautiful patterns and interesting coastal features could be found all over the island. Some courageous friends of ours even climbed up the famous Kang Lau Shek (更樓石) and took pictures in “heroic” postures!

The last stop of our itinerary was Crooked Island (吉澳). Despite the short time we spent on the island, we were lucky enough to have a taste of the local dessert and took a glimpse of the traditional decorations on the island on the eve of the quadrennial celebration.

The charming view of sunset on the sea marked the end of our joyful journey. Our boat sailed back to Shatin at around 6 pm and our trip came to a full end. We all had a good time to meet old and new friends and had a relaxing and enjoyable day.