Don't You Have Time to Think? 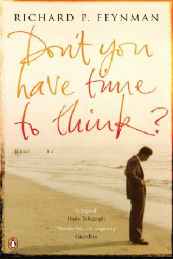 Don’t You Have Time to Think?

Richard Feynman won the Nobel prize in Physics in 1965 for his contributions in the theory of quantum electrodynamics. The New York Times described him as “the most brilliant, iconoclastic and influential of the postwar generation of theoretical physicists.”

The book, edited by Feynman’s daughter Michelle, is a collection of hundreds of letters that he wrote to his family, friends, students, critics, colleagues and fans. These letters are interesting, touching and witty.

The letters are arranged in chronological order, starting with Feynman’s correspondence with his mother and his first wife Arline when he was studying a postgraduate degree at the Princeton University. In a letter to his mother, Feynman told her that he had decided to marry Arline, who was suffering from tuberculosis. He wrote, “…I want to marry Arline because I love her – which means I want to take care of her. That is all there is to it. I want to take care of her.”  Three years passed after their marriage. Arline had been hospitalized in a sanatorium during her last months while he worked on the Manhattan Project to build the first atomic bomb. He kept on writing to her every day and managed to see her at weekends. A year after Arline died, Feynman wrote to his dead wife, “…I adore you, sweetheart. I know how much you like to hear that – but I don’t only write it because you like it – I write it because it makes me warm all over inside to write to you….” At the end of the letter, he added,  “P.S. Please excuse my not mailing this – but I don’t know your new address.” According to Michelle, the letter is “well worn, and it appears as though Feynman reread it often.”

In another letter, Feynman wrote back to the University of Chicago for not accepting the honorary doctorate that the university offered him, explaining that “an ‘honorary degree’ was a debasement of the idea of a degree that confirms certain work has been accomplished.” A year later, he rejected the honorary degree offered by Princeton University for the same reason.