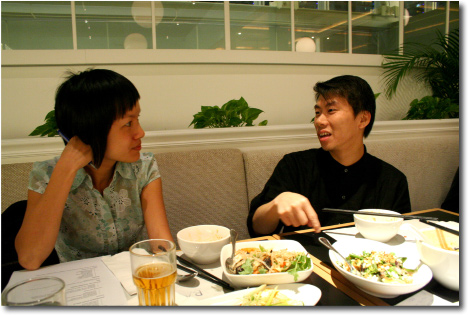 The Hong Kong education system used to be criticised as rigid and exam-oriented, and students were often seen as rather passive and lack of independent thinking skills. This seems to be changing. Jack Shu, a Warwick graduate in Drama Education & Cultural Studies, shared with us how drama education plays a part in the change.

Jack studied English Literature and Translation in a Hong Kong university and developed his interest in drama during his university years. He was involved in script writing, acting and translation. Upon graduation he started working as an editor – for an adult magazine and a children magazine at the same time as both housed under the same publishing company. ‘I was an editor, photographer – only for the children magazine – and writer all-in-one. My training in drama helped. I’m good at playing different roles.’

After two and a half years however Jack decided that it was time for him to go back to the university. He quit his job and completed a Master’s degree by research in cultural translation. He then worked for a year as the editor/translator for Oxford Children’s Encyclopaedia at the university’s Centre for Translation.

He thought about studying abroad at that time. Though he had been an editor for some years, it was not suitable for him. ‘Deep inside I long for freedom and dislike all rules. I’d always wanted to study abroad and experience a different culture.’ At that time he knew nothing about drama education. He was interested in drama and had two months’ experience in teaching, and the course title “sounded right” to him.

‘I chose Britain because I felt it had a good tradition in drama. I knew nothing about the University of Warwick then. The decision was made based on the ranking tables,’ Jack said.

This almost random choice ended up to be what Jack described as “something very very good”. He had been involved in drama production and acting for many years but he never thought of it as such an important part in education. ‘Drama is not just a teaching tool. It should be a discipline. One needs to be good at it in order to use it as a tool.’ Jack pointed out that students can learn and be inspired in a number of ways in drama through creating, expressing, communicating, negotiating and even comparing with each other. Drama enables them to think more deeply and this is very important in personal development and learning about interpersonal relationships.

In a few years’ time, drama will be introduced in the New Senior Secondary Chinese and English Language curricula. All-round development of students is an important direction in the education reform, and drama can help.

Jack’s Warwick life was more that just a discovery of an academic subject and a meaningful path. During his study, he met his other half. His wife, Amy Lee, was doing her PhD at the Centre for Translation and Comparative Cultural Studies at that time. Jack and Amy shared similar interests and they got married a few years ago. Amy is now Assistant Professor in the Department of English Language and Literature at the Hong Kong Baptist University.

When asked about his career, Jack was still a bit uncertain. He has worked as a Drama Teaching Artist for the Education and Manpower Bureau for a few years and is now a full-time drama teacher in a local secondary school. ‘I’m completing my PhD thesis at the moment. After that I’d like to get an academic job in a local university. In the long term, I wish to be involved in teacher education but this depends on how many resources the government’s willing to put into drama education.’

Don't You Have Time to Think?