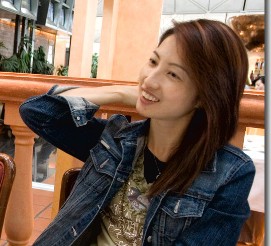 It is an interesting interview, and in fact, a challenging one. Sitting with us is Jo Ngai Yee Shan (魏綺珊), a well-known journalist and a TV news anchor prior to being the Communication Manager of Airport Authority Hong Kong (AA). We feel pressure to interview an experienced and gorgeous journalist like Jo, but we try to act like professional reporters so as not to embarrass anyone. It turns out the meeting is joyful and informative, in which we talk about Jo’s study at the University of Warwick, her responsibilities at the AA and her enthusiasm about drama. We now have a deeper understanding of her personality, beyond what we saw her on television.

We starts with her avocation: drama – a hobby she has developed since she was a student. She and her classmates founded The Nonsensemakers  (糊塗戲班) after they graduated from the Chinese University of Hong Kong. The Nonsensemakers, an independent production with no sponsor from the government, has won many outstanding performance awards over the past years. Jo sometimes plays a part in the dramas, or is responsible for the scripts. “The theme of my dramas is usually related to current affairs or a hot topic that the public is concerned about. We aim at delivering some messages to the audience,” she says.

“The unique characteristic of drama is its direct contact with the audience. We have different feelings in every  performance because different groups of audience will respond differently,” she describes her fascination with drama. Jo is preparing a new drama to be released in the Summer of 2007.

In 2001, she was awarded the British Chevening Scholarship to study a master degree in International Relations at the University of Warwick. She was recommended the course by a Warwick graduate, who was also her colleague at the Television Broadcasting Ltd. Upon arriving the campus, her first impression of Warwick was its modern buildings and facilities, which were in contrast to her preconception of British universities.

She has not only taken advantages of the knowledge she has gained from the course, but has also won the friendship with her classmates, who come from various parts of the world. “In the class, students are outspoken and express freely their opinions,” she recalls her enlightening classmates. “This helps students to develop their independent thinking,” she continues when comparing the differences between postgraduate study in Hong Kong and overseas.  Indeed, Jo is outspoken too, judging from our conservation with her. “We do our research together in the library, ” she adds to reflect their team spirit.

Jo names several lecturers who have impressed her because of their excellent teaching. “Professor Peter Ferdinand raised interesting and thought-provoking questions in the class to inspire us,” she remarks. “Besides, Prof. Shaun Breslin, my thesis supervisor, and Dr. Chris Hughes were also very good.”  Jo completed her degree with a thesis on the relations of China, the U.S. and Japan.

Besides learning, her student life was fraught with pleasure: cooking dinner with her flatmates, seeing dramas at the Arts Centre or at the theatres in London on weekends.

“Do you miss Warwick?” we ask. “I have not come back to Warwick since my graduation,” she smiles, alluding she will manage to return someday. She will continue to choose England for further study if there is another window of opportunity. “Probably I will get a second Chevening Scholarship, ” she muses. “I am interested in studying another postgraduate course in cultural studies or translation.”

Now being the Communication Manager of AA, Jo’s responsibilities are twofold: communicating with the media and performing contingency management. “I am busier than when I was in the electronic media and I have a lot to learn,” she describes. Her job is around the clock, standing by beyond the office hours.

Her previous experience in media entails her to understand what the media are interested to know and to answer the media enquiries skillfully. Her job duties require her to maintain constant coordination with various departments of AA. She also gets involved in the precautionary measures and plans for in case of a hiccup or a serious problem. She needs to keep the high quality of communication with the media and helps resolve quickly the problem with minimum disruption. Jo is ‘touching wood’ by tapping the table as she speaks, expecting consciously not a chance for any contingency program to take place. In fact, Hong Kong International Airport was awarded ‘Best in Class’ for ‘Sense of Security’ and ‘Security Inspection’ by the IATA (now AETRA) Global Airport Monitor Survey.