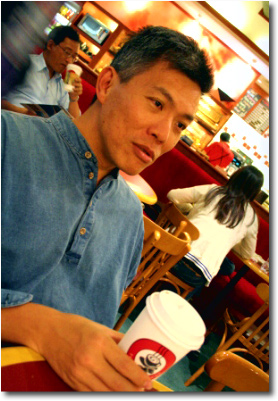 A Bridge Too Far, a Dream Not Too Far

About Prof. Edward Ng (吳恩融教授): Born in Hong Kong and educated in the UK, Prof. Edward Ng did his MBA at the University of Warwick by distance learning and passed with distinction in 2003. He is currently teaching in the Department of Architecture, the Chinese University of Hong Kong and is actively involved in the charitable project “A Bridge Too Far” which helps school children in a village in China by building a safe and durable bridge.

When Prof. Ng sat down right across us in the café, it was hard to imagine that this mid-age gentleman in casual wear carrying a rucksack is a university professor and a professional architect.

Prof. Ng began his education in the UK as early as the late 1970s. After having lived and worked in different countries, he came back to work in his birthplace and this marks a beginning of his involvement in the project “A Bridge Too Far”.

This project, which gets it names from a movie on WWII, originates from a visit of Prof. Ng to the Yellow River Plateau in the 2000. Far in Maosi Village (毛止村), Gansu, children had to cross the river every day on their way to school. A temporary and primitive bridge made of mud and tree logs were built every winter as an expedient for the villagers to cross the river. Yet, this fragile bridge would be washed away during summer months and students were forced to venture across the river. As a result, sad news of injuries and accidents were often heard. This inspired Prof. Ng to bring into use his expertise and designed a permanent bridge for the villagers in the hope of facilitating students going to school and helping the sustainable development of the humble village.

After painstaking years of planning and fund-raising, the group with enthusiastic professionals and dozens of Hong Kong and mainland university students, travelled afar to Maosi Village in summer 2002. Amidst the intense heat and with the help of local villagers, it only took the team an amazingly six short days to finish building the “Wu Zhi Qiao” (無止橋).

Prof. Ng gave us a detailed recount of the building process which was blended with both hard labour and happiness. He also recalled an interesting episode: one day the village children helped in lifting the rocks which would be used for building the foundation of the bridge. The older children wittily picked the smaller rocks while the younger children indiscriminately picked the bigger ones. Prof. Ng thus concludes that the size of rocks one lifts reverses one’s IQ: the higher ones’ IQ, the smaller the rock one picks.

Apart from setting a good example towards sustainable architectural design and communal participation, this project has also won prestigious awards including the renowned Royal Institute of British Architects (RIBA) International Award. This worldwide recognition is no doubt a strong boost to the team’s confidence. To them, Wu Zhi Qiao is not only a bridge leading studious students to school; it also symbolizes the road to development and prosperity of the village.

In the meantime, Prof. Ng is busy preparing and raising fund for “A Bridge Too Far II” in which the team is planning to construct another bridge in the Ganzi Tibetan Autonomy prefecture (甘孜藏族自治州) of Sichuan Province where villagers are facing similar problems as those in Maosi Village did. To him, apart from a charitable architecture project, “A Bridge Too Far” is nevertheless an education for the younger generation in Hong Kong. Looking ahead, Prof. Ng would like to help in the infrastructure building for those in need in the mainland.

With the passion and effort of enthusiasts like Prof. Edward Ng, the construction of more infrastructures shouldn’t be too far away. However, as Prof. Ng remarks, there is still a long way to go in improving the livelihood of villagers in the remote areas of mainland China and in educating our future generations.

For details about the project “A Bridge Too Far”, please visit: www.bridge2far.info