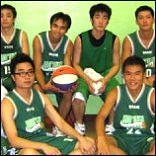 The WHKS Basketball Team was formally formed by a group of Hong Kong students in Warwick University in 2001. It was then further expanded to include some talented players from other Asian Societies in Warwick University such as Malaysian and Chinese Societies. At the early stage, we participated in friendly games with other universities in West Midlands. During 2002 to 2003, we participated in the basketball tournament organised by UMIST Chinese Society and won the first basketball tournament championship for the WHKS.

So far we have been invited to 12 basketball tournaments (organised by Hong Kong, Chinese, Malaysia and Singapore Society of University of Nottingham, Manchester, Birmingham, Oxford, Cambridge, London, Sheffield and Warwick) from 2002 to 2005. We won 9 champions and 1 runner-up out of 12 basketball tournaments. Therefore, the WHKS Basketball Team is well-known among UK universities in London and the Midlands.

As graduates of the University of Warwick, we are all proud to be members of the WGAHK Basketball Team. We have good team spirit and are like brothers to each other. Talented players are welcome to join us. For those who are interested, please contact Alan Ho on alan_giant@hotmail.com

A fantastic start for the Warwick Law Network